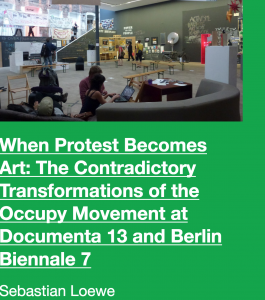 [in English]
Title: When Protest Becomes Art: The Contradictory Transformations of the Occupy Movement at Documenta 13 and Berlin Biennale 7.
In: FIELD. Journal of Socially-Engaged Art Criticism. (University of California)
Link to article
Link to reply from Noah Fischer
Link to comment on reply

In 2012 the Occupy movement decided to participate in an international art exhibition in Berlin and shortly after vanished eventually. I wanted to know what happened to the movement when it stepped into the realm of art and why it necessarily resulted in a contradictory outcome for the movement’s goals. The article stirred up some controversial debate with a member of Occupy, Noah Fischer who responded in the Fall issue of 2015. I also had the chance to comment to his response.